We have been making it safer, easier and more profitable to transport timber for more than 120 years. Our successful product development, along with selling the widest and most flexible range of timber bunks on the market, have led to us achieving a world-leading position in the sector.

We share the everyday working lives of our customers, which is a significant explanation for our success. Hauliers and drivers know what’s best when it comes to keeping timber transport moving along. By listening to them, we have created a unique working relationship with our customers. In addition, our own practical experience tells us what to ask them and, above all, means that we know what they’re talking about.

Putting new opportunities to good use and identifying new solutions for customers is in ExTe’s DNA. Our ability to change and innovate gives us that extra edge in product development – and a competitive advantage.

We supply products to timber hauliers all over the world who stipulate demands for road safety, a good working environment and rational transport. Our product development has created standards in many countries regarding the design of timber bunks that are safe in traffic. We select systematic design and production solutions that deliver maximum safety in operation.

ExTe has by far the widest range on the market to meet every need. Development that never compromises on safety is your best guarantee.

We develop, manufacture and market world-leading load securing equipment for efficient and safe timber transport by road and rail. We contribute to better profitability, safety and working environment for hauliers and operators all over the world.

Daring to think along new lines and finding new solutions for our customers is part of ExTe’s soul. Successful product development depends greatly on our ability to listen and respond to the ideas and views of hauliers and drivers.

We maintain a constant focus on improving and developing our products to guarantee the highest possible safety standards for drivers, hauliers and other road users when loading, unloading and transporting timber. Today’s solutions are based on a long tradition of creativity and innovation.

Our products must offer a high level of operational and technical safety to cope with the extremely tough conditions that the transportation of timber involves.

All our new products undergo rigorous testing on test benches, in which we simulate mechanical loading, transportation and unloading, as well as vibrations in no-load conditions. After passing the tests on test benches, a zero series is subjected to practical tests before launching the product on the market.

A key strategy in our development work is to create solutions that improve the profit margins of the hauliers. ExTe is currently certified according to ISO 9001:2015, ISO 3834-2 and DIN 15085-2. We also work with a number of internal processes and management systems to ensure that quality and environmental impact are always taken into consideration. Maintaining good order is a key concept for us.

ExTe began its operations with a classic agricultural product. That was back in 1898. A.E Sandstedt & Söner Smidesverkstad, as the company was called in those days, began mass-producing its harrow. A product designed to meet agricultural needs of the day and the starting point for ExTe’s growth and rise to a position as the world’s leading manufacturer and supplier of timber bunks and automatic tensioners.

The first product that led the company’s operations into the forestry transport industry was the horse-drawn timber sledge, the forwarder of the time. The timber was dragged from where it had been felled to the track and then loaded onto the timber wagons – the equivalent of today’s timber trucks. The timber was transported to lakes and rivers, from where it was floated to sawmills and pulp plants.

During the 1920s, the distance between felling and the floating routes increased. More timber was transported by truck. And it was then that the first timber bunks were developed.

Another problem in those days was the actual process of loading the timber. It usually took two or three men to drive and load the rig. The timber was loaded entirely by hand. The first wire cranes did not come into use until the 1950s.

From the 1950s onwards, floating logs went into decline, with all timber eventually being transported by truck. There was considerable demand for new, modern timber bunks and other equipment for the transportation of timber. The safety of the truck drivers came into focus.

The Excenter bunk with telescopic stanchions was developed in the late 1950s. This made lowering the stanchions easy.

This innovation gave rise to the name ExTe (Excenter and Telescope).

The 1960s brought new design concepts for timber bunks. Up until this point, the idea had been to release the stanchions and let the timber roll off the truck and trailer. New unloading methods, where the timber was lifted off trucks and trailers using forklifts and cranes, led to the development the modern timber bunk with permanent stanchions.

ExTe’s first, modern timber bunk was the 144 bunk, which came into use from the late 1960s. The versatile 144 bunk is still a major export product for ExTe today.

In the early to mid 1970s, ExTe began a systematic strategy for making inroads into the European market. This was the start of a highly successful export operation that now covers every continent.

In 1971, ExTe’s innovative development was really put to the test, when it unveiled the first aluminium bunk, the ExTe Aluminium. It was lightweight, flexible and coped perfectly well with the demands entailed by loading, transporting and unloading the timber.

But the idea was a little ahead of its time. The market was not ready for such a drastic change. “Lightweight aluminium bunks will never stand the strain of demanding forestry transport” was a commonly repeated opinion. But by 1974-75, aluminium bunks had made their breakthrough with the ALU 340, 360 and 390.

Using its experience of the 106 and 109 bunks from the 1980s, ExTe launched the C40, C60 and C90 in the early 1990s. This series of combi-bunks was greatly appreciated by hauliers. The bunks were robust and hard-wearing, with steel bolsters and aluminium stanchions. Some timber rigs still use C bunks today.

In 2002, ExTe launched a new generation of combi-bunks, the E4, E6, E9 and E12, which were a great success. The E-bunks have now been replaced by the D-Series, which comprises the lightest combi-bunks available on the market, with steel bolsters and aluminium stanchions.

When discussions regarding the weight of loads really took off in Sweden in the early 2000s, ExTe was already well ahead of the game with its development of the new generation of aluminium bunks. In 2005, it launched the world’s lightest timber bunks, the A-Series. Within a couple of years, the A bunks were a firm favourite among timber hauliers, and demand for the product exceeded all forecasts.

ExTe has also developed timber bunks for the transportation of timber by rail. Tens of thousands of Maxi Stanchions, Wood and SR bunks have been supply to the Scandinavian, German and British railways.

Over the years, ExTe’s success has created resources and opportunities for investing in the development of new and even safer load securing systems. Com 90, which ExTe began developing in the mid 1990s, is one example of the company’s unique innovation, allowing the driver to operate bunks and secure the loads by remote control. Com 90 is now an established system on the market. 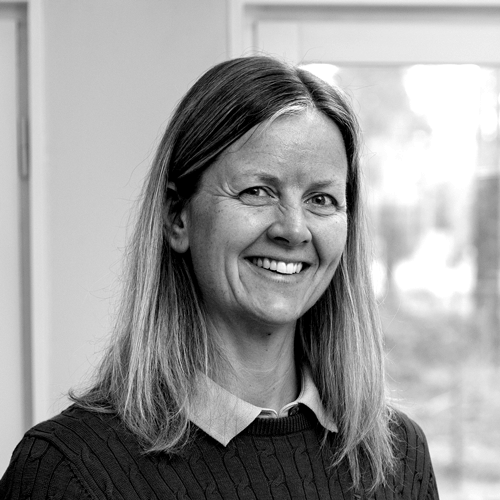 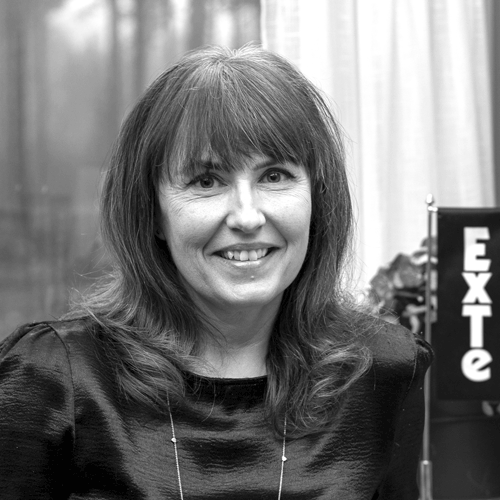 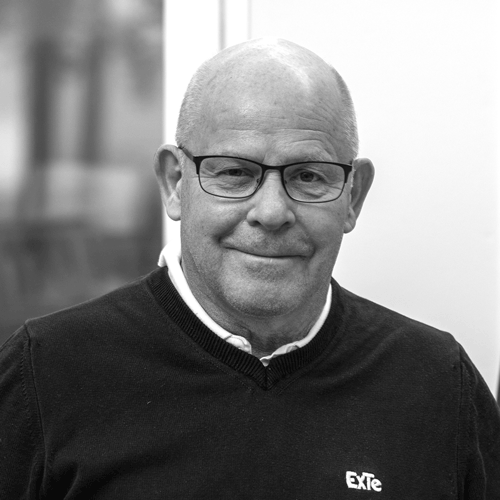 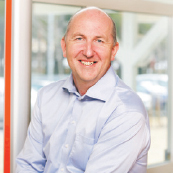 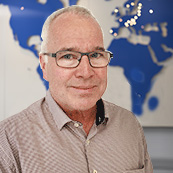 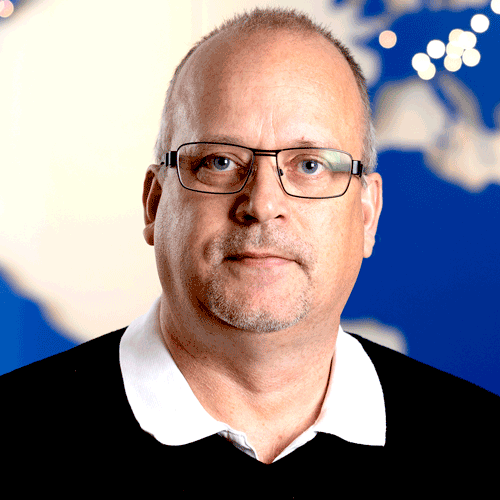 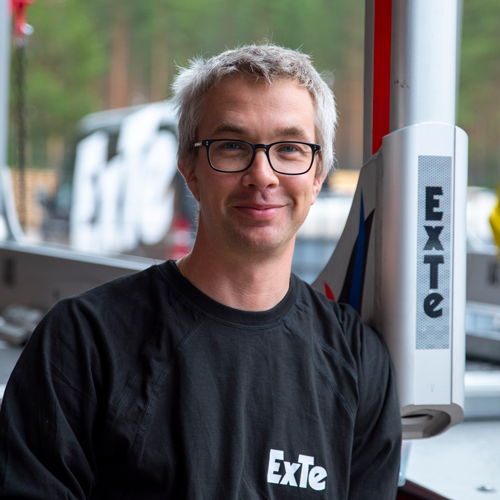 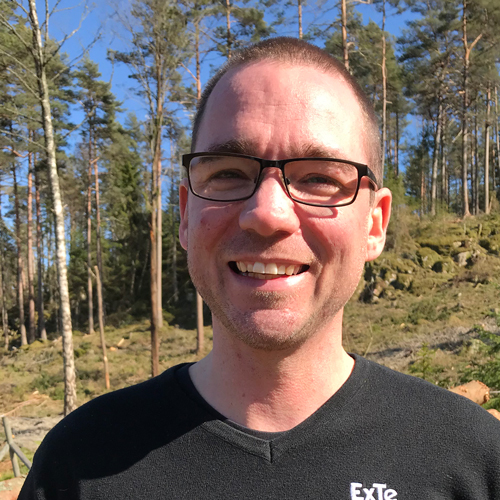 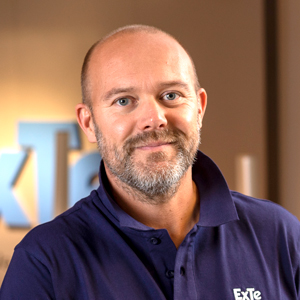